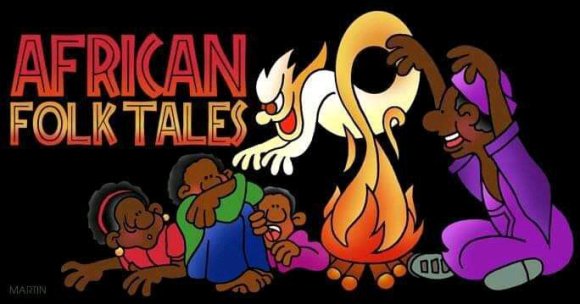 When I, the storyteller, say: Ifochakpii! You, the audience, will reply, Waa!! (Pronounced as ‘War!’) This is the Igbo people’s storytelling tradition. There are different ways of introducing a story to the audience. To the Igbo people, it starts with a chant-like ranting that tries to capture all present attention. So the storyteller greets his audience in that manner as they reply to him in excitement. The storytelling mood is a lively one, and such introit may play a role in keeping the spirit so.

Storytelling is a unique culture in Africa. Storytellers are revered across the land. We may compare them to the present day actors because they act. I can compare storytelling to modern-day stage drama. Storytelling is respected because it passes ancient knowledge and wisdom from one generation to another. It’s a time when everybody, young and old, gathers to listen and learn about the tradition of a place and life’s virtues through stories told by their ancestors. Though much of these stories have been lost or modified with time, the morals, which is the crux, remain intact. Sometimes they act as bedtime stories meant to aid or lull people to sleep. All over the world, storytelling precedes reading.

Tortoise: Main Villain & Hero
Growing up in West Africa, I learned that the Tortoise is the dominant character in most stories. He is called Mbo or Mbe in Igbo. Some clans gave him, his wife, and children other names. His wife is called Alibo in Ovim. I can’t remember his son’s name, but it may not matter for now. The Tortoise plays funny and shrewd roles. He is generally perceived as a cheat who goes about causing mischief for others. Sometimes he gets to win; other times, he is a loser and a lesson for the little ones. The Tortoise has been featured in many stories, few I can remember myself. He has duped the Boar in one account, deceived the host of birds that lent him a feather each, cursed the spider that saved him from the ghost town, and dealt with spirits. Hee is a star in the African folklore scenario.

Yet why he was chosen for these excellent roles is what I have not been able to understand. We have bigger, faster, smarter, and funnier animals, but the Tortoise was picked to play lead roles in most of West Africa’s traditional folklore. Thee Tortoise is a slow, lazy, and seemingly dumb animal, but in tales, he is a kingmaker, a genius, or the wise one. Looks are truly deceptive in African folklore.

Why should we preserve stories?

Apart from the Tortoise that fell from the birds’ firmament party, no one in reality and fiction had the privilege of falling from the skies. What I mean is that nothing happens. Every story serves a purpose, be it fact or fiction. And no society is complete without a history, a story. So stories are careful documentation, written or oral. We have records and traditions to discuss today because people had kept accounts and details of them. I’ll write more on this topic in a separate blog post.

For now, can you tell me which African story is your favorite?

I unfortunately don’t know any West African folk-stories but after reading your post I will definitely have to research them. It’s incredible how stories influence a culture or society.

Beautiful. Let me know your find, if you don’t mind. 😉

I do not know any African stories, but I’ve always loved the African saying, “When you bump a pot, it is what’s inside it that comes out” Almost a whole story in one sentence!