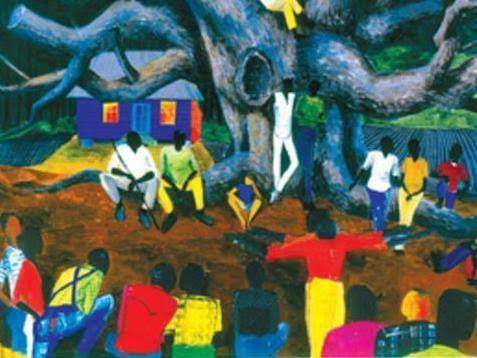 I heard the Wind tell this story

Storyteller: Gather my friends. It’s time to tell a story. So gather by the fireside, warm yourselves. Bring the little ones to the center. Keep them warmer for the night, and her cold hands are nigh. Sit under the branches of the mango tree. From there, everyone can see streaks of moonlight on the grassland. As you watch the fire lick those dry wood, pay attention to this short tale of mine. I’ve heard the wind and sky tell it in different tongues, styles, and climes. Listen, because there may be a lesson or two. If not, it might just be another lullaby waiting to help a good night’s sleep! A good day ends with a good story. Will you like to tell me the lessons you picked? Ifochakpii!!

The Hippo and his seven wives

A long time ago, when things were not as it was today, there lived a proud Hippo chief. He had seven wives, as was the tradition for wealthy animals then. He had a secret name known only to his wives. They learned to keep it unknown to anyone.

One day the Hippo hosted a party, and when he made his speech, he put out a challenge to his village people. “I’m afraid, my people, if you can’t reveal my name, you have to go home hungry. The dishes here will only be available to all when you reveal my name!” The whole congregation was left stunned. All those mouth-watering dishes will be left unattended. Ah! Well, some tried to guess his name but got it all wrong.

The animals dispersed hungry. And they say a hungry person is an angry person. Many weeks passed, and he hosted another feast. No one was able to reveal his name. Many animals guessed and were wrong. Then the Tortoise rose to speak. “Sir,” he started. “Since you have shamed us severally, can I ask what we stand to gain apart from the feast you have here?” The chief replied to him, “Well, I’ll give you my land and retire to live in the river!” It was a tough challenge. He believed that no one could get his name right. The crowd dispersed hungry again.

Now the Hippo and his wives had a favorite bathing stream, just by the foot of the remarkable baobab. It was a luxurious and private bathing spot acquired by the Hippo for his household.

One day the hippos went down to the stream for a dip. The Tortoise, well aware of their movement, dug and hid on the soft sand with his hard shell stuck out but disguised as stone. He waited and waited. At last, the hippos started back to the village. The chief led the way and was followed by the eldest wife. They went in a single file, thereby leaving the youngest wife behind.

When the last wife came to the soft sands, the Tortoise raised his shell a little so that she struck her foot on the hard surface and yelled: “Nnayi ukwu dim oma my husband, come and help me. I stuck my foot on a stone!” When the hippos finally left the scene, Tortoise ran back with joy.

A few weeks later, the hippos hosted another feast. They had fun mocking other animals. When it was time for name revealing, the Hippo marched majestically to the podium to allow animals to guess his name. All the animals tried, but none could get it. The Tortoise was the last to try.

There was complete silence, broken by a round of applause and sudden feasting when the Hippo’s face dropped. Without words, the hippos marched to the river with their belongings. To this day, my friends live in water. Never to return to land again!