I knew an old man, Henry
He was huge, brave and hairy
On a beach away from the ferry
He lived, happy and merry

A little insect crawled up his foot
And ‘ah hu, ah ha!’ he did hoot
Hopping about like an Indian goof
But smiling and strong after the suit

He told of stories, strange to all
Blackened by the Sun’s heavy ball
Waving an imaginary gun up above peoples head in
the hall
Marching and staggering, holding the walls

He was this, he was that
He bragged and all must
For every reason be quiet
For a drunkard, a fall was imminent

And so he lived all about this town
Caring for nothing, but cheap curtseys and bows
Wiping tears moulded across his brow
His collar stiff and muscles brawn

And then to the dust he went
And on his grave, was a print
‘To a fair soldier, strong and gallant
To whom his people he bullieth!’

I think I should my head lay for a while!

Ovim is my hometown, just arrived from the busy congested city.

When the night skies cloud
And all seem black and dark

When life seems so strange
And all about, hope evaporates

When it rains and floods
And there’s no tunnel out

When people laugh at you
Despise, Forsake, Jeer at you

The gloom and sadness falters away
This we must live to say!
The stormy night shall pass away
Praise be to God for another day
And for all beautiful things that come with the day!

There are dreams I like to forget, strange and at times confusing. Dreams that came and went and when I wake I find myself still wallowing in my own reverie, call it sleepwalking
if you may but I for all the journey we ever had with The Wave detest all such occurrences. It plays on my mind and depresses my fancy. After the quick fight with the cannibals of Juren, a small island off the coast of the bigger island of Shark, the Lifnante decided to have some rest on the nearest land
around. We had sailed for many days without the sight of land and everywhere there
was the sign of gloom. Some pirates drank themselves to stupor, staggering, some
heading for their beds and some picking fights as usual. I could see Sundjata peering
through his binoculars, I wonder what he sought. There was only one way to find out. I
ran straight up to the Ships head.

‘Hellow’ I cried.
‘Well, Hai!’ he replied after lowering the lens to see the intruder. I shifted a bit, trying not
to show my unease. He must have noticed. ‘Dont worry little fella, we ain’t meeting any
other cannibal.’ He said reassuringly and smiling his goofing best. Oh goodness, as if
he read my mind, the encounter with the cannibals was something bloody,
‘So what were you staring at?’ I asked stupidly, faking a smile.
‘Oh!’ He grunted. ‘ A legend has it that here, just somewhere near this piece of ocean,
that some living giants stay. The Tarantula Snake Fish lives here and if the Legend is
true we might happen to meet them’. He was trying to speak correctly, perhaps he did. I
shuddered at the thought of big living monsters. What excitement does he derive
knowing that a disaster awaits the Wave? That’s Sundjata for you always making serious
issues trivial.

Then a shout of land rented the air from Crocken, the ships heralder. ‘Ahoy, Ahoy!
Lande! Lande!! I sighte lande!’ He yelled, excitement written all over him. I saw the
pirates all rushing out from their hideouts, arranged in different groups whispering,
talking almost at the same time. The Lifnante came out bearing his binoculars. At a
strong swing of his hands he raised it to his face.
‘Aye! That is some land. Well done boy’ he ranted. ‘All to sails.’ Then like a sounded
bugle everybody moved about to their duty post. It was a big effort and then we directed
the Wave towards this strange and lonely island sitting on a huge volcanic rock.
Many small tug boats were lowered unto the sea, and some pirates paddled away
happily to meet this new land. I was in a boat with Sundjata and five other pirates.
From the boats we could see the island close in. There were very white sand beaches,
immaculate and fine shiny pebbles glittered. It seemed that no man ever set foot here.
The hinterlands harbored a forest and from our closeness we could hear the various
cries from aves. Behind the forest we could sight the Volcano standing majestically,
bidding us welcome, extending Greek gifts to us…

‘Yitzhak, stay with me, for no reason shall you depart from my side.’ I heard Sundjata
whisper to me. Sincerely my whole being was with the wilds and not Sundjata. But a
good portion of me hearkened to him. He had been good since the day I was taken on
board. I could see his two pistols dangling about and a sword silently hidden in his
long pants. I looked up and smiled at his glare. Then the boats hit the beach sands, and
all climbed off running up the sands, trying to out run the others. It was a holiday from
the long sea voyages.
Night was on her way trifle shy. Anyone who ever took solace on the Night risks his
own life. Don’t mind that, I actually stole the Lifnantes quote. But infact Night cares for
no one, and cold nights are cruel to those who took refuge in her arms. I heard the
Lifnante give orders for camping. All about many camps were set for the coming
evening. Some pirates stayed back on the Wave, and those were sickly ones and few
who couldn’t do without the Waves comfort. The camps sprang up in few minutes and
then cooking for the evening commenced. Some fishes caught from the sea were
cooked in coconut oil and many more were smoked on the bonfires. The smell of fish
boiled in coconut oil aroused my appetite. It was long since I ate ‘properly’ boiled food!
A plateful was giving to me and with delight I set about eating. It was then that I saw a
movement in those trees of the forest. Like a flash, something moved. I decided to
investigate, but I had no courage. Reporting to the Lifnante and the merry pirates would
spoil the calm and cool evening merriment. I saw the movement again- a swooshing
kind of movement. I dropped my plate and walked up to Sundjata. He was playing cards
with some pirates.
‘This is pay back. Now it will cost you another Nickel’ he growled as he laughed. The
other pirates were all grumbling and talking in low voices…
To be cont…

Having a tough time reading thru you
Now the lights are gone
Trying to guide this little candlelight with my shaky
palms
The light grows wild and full of the strange twists of
the world
I put it back on its hold
Caring so it doesn’t fall
But the empty world beckons to it again and again
Bothering its tranquility and to this vanity it plays
But no, tonight you must be with me
Though moths, wigs and the lots bother you my
light
You shake and wave about on your might
You shine forth like a Suns glow on a snow white
As a cracky ice and a dying Earths blight

A pointer; God is true love
And for Gods love, I loved you dear reader
I share you this message from God.

I am sharing this love with you little one
I find no words to express my joy
My attachment to you
The whole world revolves around this:
The way I feel about you

Being far away from home. With my lil cousin @ Ovim- We share the same first name. 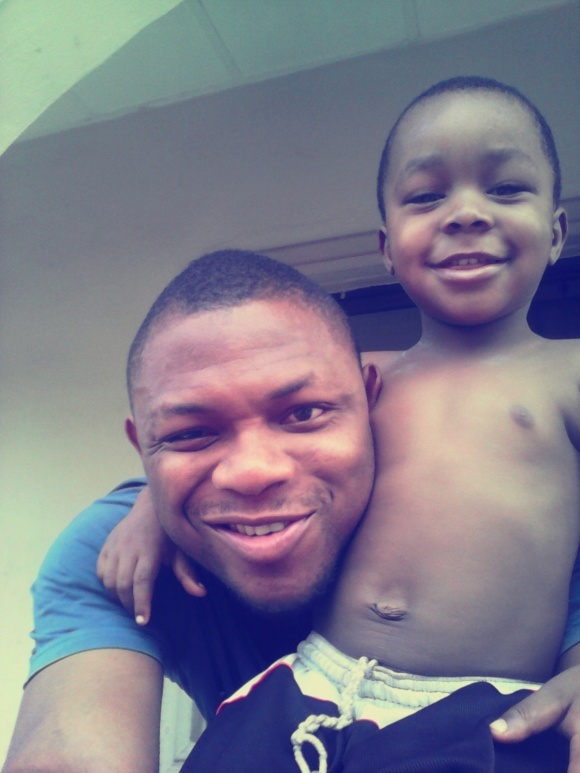 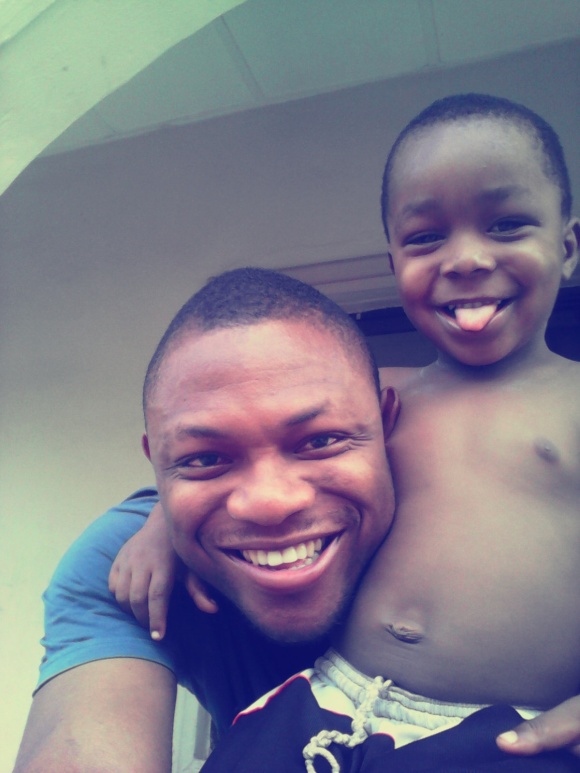 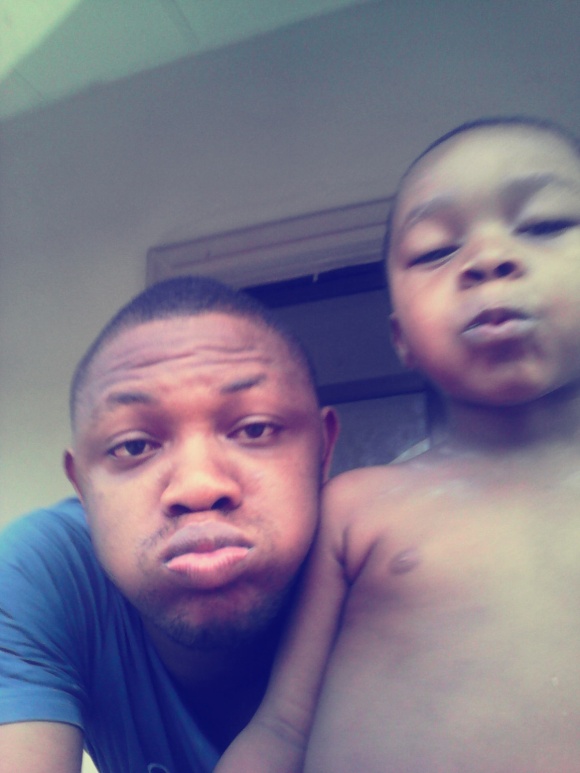 And to you all who see this; this evening:

There are many of them here
Over the clouds of Ovim
Glittering like tiny jewels in the dark
Standing majestically over the hills
Under where we sight the stars
On a mild quiet evening
Natures gleeful stare on us
And our own look, up
To meet her friendly gaze
Like expectant infants
Sitting on the dusts
Waiting for the mothers call
Those stars say hello
They tell a strange tale
Why the Moon went sick
How the tall Giraffe
Ate the sickly Moon half!
The other confident sound
Is of the wild crickets
And their peers of the night choir
Loud, blowing, uncaring, continuously
Blasting strange pipes this night
Where the stars shine gleefully

I dedicate this to you, someone. I know not.

Sorry guys my system got spoiled. Trying to come back, missed it and love!